To print a PDF of this article CLICK HERE

It has been estimated that 7.4% of women and their husbands in the United States are infertile and that the number of infertile people in the world may be as high as 15%.

When under the age of 30, a woman’s chances of conceiving may be as high 71%; when over 36, it may only be 41%. The number of infants born begins to exponentially decrease after the age bracket of 35–39. For women, having extremely low amounts of body fat and excessive exercise are associated with ovarian dysfunction and infertility. Approximately 20.7% of infertile women seeking intrauterine insemination (IUI) had also been diagnosed with an eating disorder. Studies have found that folate, vitamin B6, vitamin C, vitamin D, vitamin E, iodine, selenium, magnesium, iron, and DHA might have a positive impact on infertility treatment on female fertility.

Infertility in males is often the result of reduced sperm count, abnormal sperm quality (e.g., reduced motility and altered morphology), or altered levels of sex hormones (e.g., reduced testosterone). In the last 10 years in the researchers have discovered that oxidative sperm DNA damage has a critical role in the etiology of poor semen quality and male infertility. Approximately, 30-80% of infertility cases are caused by oxidative stress and decreased levels of seminal total antioxidant capacity.

One of these studies that stood out was conducted in the Czech Republic regarding men living in two different locations, one more polluted than the other. Men who were exposed to higher levels of air pollution were more likely to experience abnormal sperm morphology, decreased motility, and an increased chance of DNA fragmentation. In a study including 950 men conducted by stress levels such as their job, life events, and even social strain were seen to have a significant negative impact on sperm density, total sperm counts, forward motility, and morphology.

The most recent research shows that the reasons for infertility are heavily weighted towards having children later in life, stress and high toxicity levels from polluted air, heavy metals, pesticides, herbicides, phthalates, dioxins, and other sources of chemicals. The risk of developing female and male infertility has also been associated with gene polymorphisms that decrease the activity of enzymes involved in systemic oxidative stress.

To prevent trying to cover every angle of infertility, this post will focus on the gene polymorphisms associated with heavy metals, chemicals, and oxidative stress. However, I first want to address research on the other genes associated with infertility and miscarriages.

All of the genes associated with folate metabolism are going to be relevant for fertility and pregnancy. Here are a few studies.

It is important for your patients to understand that folate-rich foods contain the whole spectrum of folate compounds and are going to be the superior source for optimal folate metabolism.

The Thyroid Genes, VDR and Infertility

Thyroid dysfunction can affect fertility in various ways including luteal phase defect, high prolactin (PRL) levels, and sex hormone imbalances. In a study of 394 infertile women, 23.9% were hypothyroid with a TSH greater than 4.2. After treatment for hypothyroidism, 76.6% of infertile women conceived within 6 weeks to 1 year.

While the DI01 gene does not affect TSH levels, a homozygous gene can indicate that the thyroid may need more attention due to affecting the deiodination of T4 into T3. Hypothyroidism affects MTHFR function, so a combination of variants in MTHFD1, MTHFR, DHFR, SLC19A1 and poor thyroid function would be highly relevant. Iodine, selenium, B2, magnesium, A, D and zinc are the most relevant nutrients for thyroid health.

Review the post on Nitric Oxide Genes and Inflammatory Disorders for a further understanding on how to optimize the nitric oxide genes. Researchers believe nitric oxide can help prolong fertility in women, prevent genetic abnormalities during early embryo development, prevent Down Syndrome and spontaneous miscarriages, and other issues associated with pregnancies among older women.

One study found that women who had variants in the NOS3 gene (Cardiovascular Section) were more likely to experience multiple miscarriages due to low endothelial nitric oxide levels, affecting blood flow to the uterus and fetus.

The risk of having at least two miscarriages or infertility problems was 2.5 times greater for individuals with variants in the Factor V Leiden gene (F5 gene in the Cardiovascular section) versus controls.

People who have the homozygous variants in MTHFR 1298 are much more susceptible to the harmful effects of heavy metals including lead, aluminum, and mercury. This may explain why men with the homozygous (C/C) MTHFR A1298C genotype had a statistically high significance for infertility.

Vitamin C, B1, and B6 deficiencies have also been reported to enhance sensitivity towards cadmium and lead toxicity. Review the NBPF3 gene for B6 and SLC23A1, GSTM1 and GSTP1 gene for vitamin C requirements.

Lead interrupts the hypothalamic-pituitary axis and has been reported to decrease overall fertility. Lead may alter sperm quality in men, and cause irregular menstruation, induce preterm delivery, and cause miscarriage, stillbirth, and spontaneous abortion in women. Vitamin C lowers lead levels in the body while calcium blocks its uptake, and this may be one of the mechanisms by which vitamin C helps fertility along with lowering oxidative stress levels.

Research from scientists in the UK and France suggests that human exposure to aluminum may be a significant factor in falling sperm counts and reduced male fertility. Aluminum in the food supply comes from medications, antacids, water, food additives, and contamination by aluminum utensils and containers. As one study accurately states “the real scientific question is not the amount of aluminum in foods but the availability of the aluminum in foods and the sensitivity of some population groups to aluminum.”

Malate and citrate both bind and remove aluminum from the body, making magnesium malate/citrate supplementation a great addition for MTHFR 1298 homozygous genotypes. Apples contain pectin and malic acid, making them an excellent detoxifying food for aluminum and lead.

Mercury can precipitate pathophysiological changes along the hypothalamus-pituitary-adrenal and gonadal axis that may affect reproductive function by altering the circulating of levels of follicle-stimulating hormone (FSH), luteinizing hormone (LH), inhibin, estrogen, progesterone, and the androgens. Reduced fertility among dental assistants with occupational exposure to mercury has been found in research. Studies in Hong Kong demonstrated that increased mercury levels were associated with infertility in both men and women.

In males, mercury can have adverse effects on spermatogenesis, sperm count, and testicular weight. Evidence also exists linking mercury with erectile dysfunction. In females, mercury has been shown to inhibit the release of FSH and LH from the anterior pituitary which in turn can affect estrogen and progesterone levels leading to ovarian dysfunction, painful or irregular menstruation and premature menopause. There is also good evidence linking mercury with menstrual disorders including abnormal bleeding, short, long, irregular cycles, and painful periods.

Mercury is associated with the fetotoxicity which can present as miscarriage, spontaneous abortions, stillbirth, and low birth weights.

Exposure to cadmium occurs through plant-derived foods and certain seafood, as well as from tobacco smoke. Non-organic agriculture uses high amounts of synthetic organophosphates which end up in our food, creating a very high phosphorus content. Synthetic phosphorus concentrates the amounts of heavy metals, like cadmium and uranium in non-organic soils and food. Even at low levels, cadmium exposure in adults has been connected to adverse effects on the kidney, bone, cardiovascular system, reproductive system and hormone-related cancers. In mice studies, testicular necrosis, low libido, and infertility have occurred from cadmium exposure.

The half-life of cadmium can be pretty long, 10–30 years. Low iron levels are associated with a higher absorption of cadmium, and since women are more prone than men to have low iron status, they are more at risk for accumulation. Low zinc levels are also associated with elevated cadmium levels. Low levels of iron and zinc can be common in the female population.

Researchers are still attempting to narrow down the most relevant SNPs in regards to cadmium detoxification. Genes that are related to iron and zinc metabolism and glutathione appear to be the most relevant.

We have discussed the dioxin TCDD in previous training posts, and how it severely harms the BRCA genes for DNA repair. In 1976, an explosion near Seveso, Italy resulted in the highest TCDD exposure known in residential populations. Twenty years later, a retrospective cohort study called the Seveso Women’s Health Study was conducted on this population. They found that for every 10-fold increase in serum TCDD, they observed a 25% increase in time to pregnancy (more than 12 months).

One study reviewed sperm contamination by the dioxin polychlorinated dibenzo-p-dioxins/furans in 168 infertile and 49 fertile men. In the sperm of infertile men, the content of dioxins and furans was 2.2-2.3 times higher than the fertile donors.

As mentioned in the post DNA Damage, Protection and Repair, dioxins accumulate the most in the fat of animals from their feed and goes up with the food chain. Patients need to be cognizant of the source of their animal fat. Research has found that resveratrol was most effective at preventing TCDD-induced DNA strand breaks.

The Antioxidant Genes and Infertility

Researchers looked at polymorphisms in antioxidant genes that are more susceptible to sperm DNA damage and male infertility including GPX1, CAT, PON1, NQO1, SOD2, and SOD3) in 580 infertility cases and 580 controls from a Chinese population-based case-control study. The results indicated that the PON1 (rs662) and SOD2 Val16Ala (rs4880) variant genotypes were associated with a significantly higher risk of male infertility.

The PON1 gene detoxifies pesticides. Organophosphate pesticides are known factors involved in male infertility. Men working in agricultural regions and greenhouses which use pesticides have higher concentrations of common pesticides in their urine and a 60% decrease in sperm concentrations.

It is important to review and optimize the genes GSTM1, GSTP1, GPX1, CTH, PON1 and SOD2 for your patients experiencing infertility.

Further Research on Nutrition and Heavy Metal Detoxification and Protection

The following is a summary of the genes to address for your patients with infertility and miscarriages. 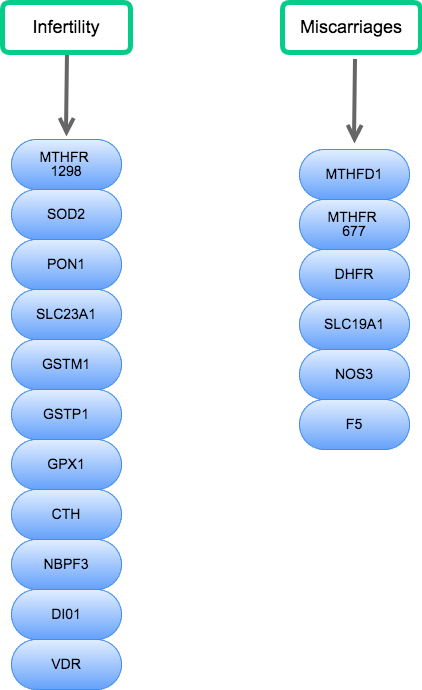 We'll help you achieve thriving health with insights you simply can't get anywhere else. Subscribe to our newsletter to ensure you are always the first to know!

You have successfully subscribed!