All Health Starts In The Cell Membrane And Mitochondria | Nutrition Genome

All Health Starts in the Cell Membrane and Mitochondria 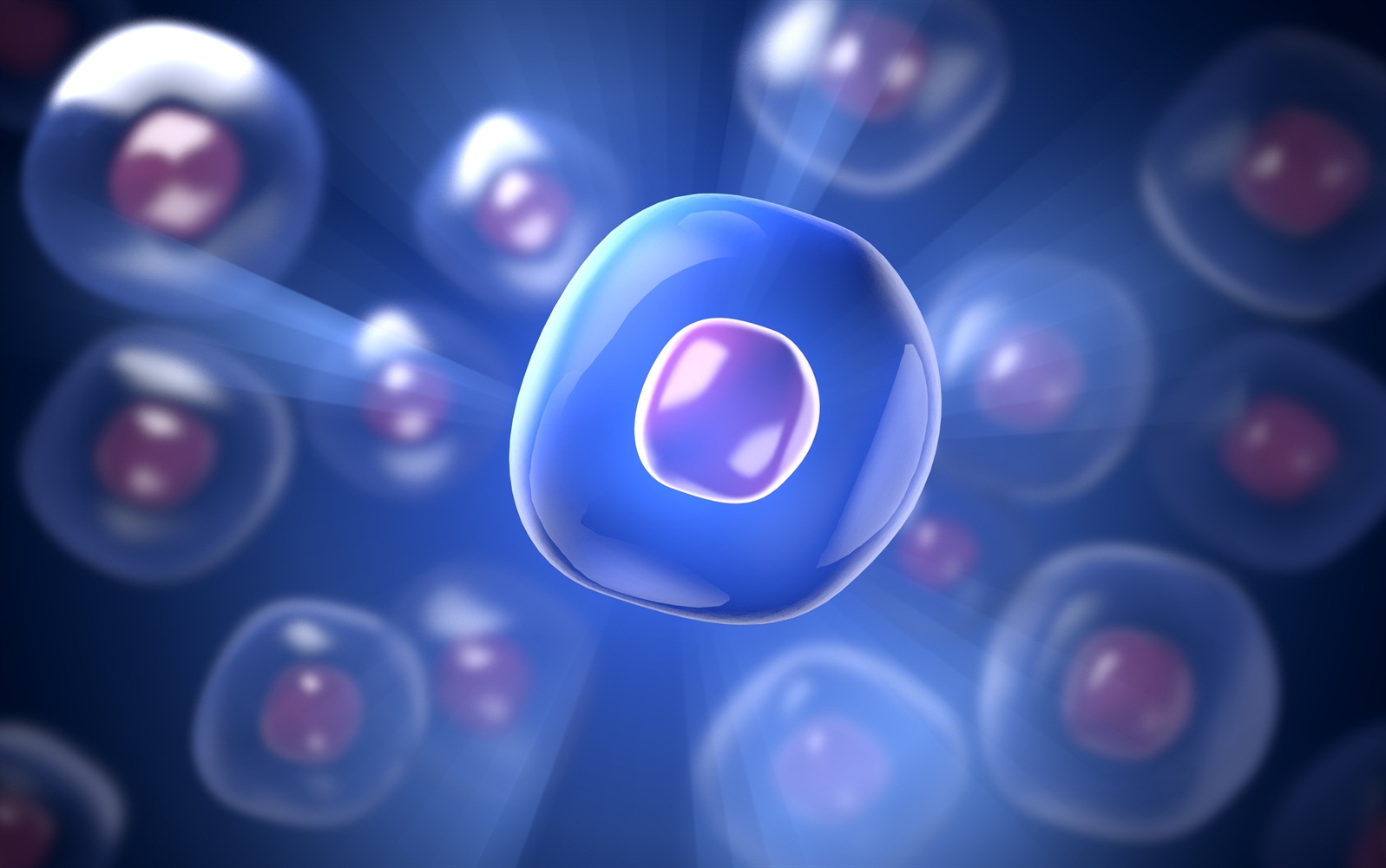 The Story of the Cell Membrane and Mitochondria

Imagine your cell is like your own personal kingdom. The nucleus and the mitochondria are the King and Queen, housing your DNA. The cell membrane represents the moat and strength of your wall surrounding the castle, and the cytoplasm is the surrounding grounds. Your fortress is reinforced by your diet of pastured muscle meats and organ meats, wild fish, pastured eggs, organic local fruits, organic local vegetables, organic mushrooms, organic nuts, organic seeds, pastured dairy and organic grain.

Sometimes these foods get disguised in invisible vegetable oil, sugar, preservatives and chemicals, and presented in a way that is both aesthetically pleasing and tasting. Fast food, sugar, preservatives and processed food are all inside the trojan horse that you allow into your kingdom, creating an all out war in the cytoplasm. Now that the gate is drawn, heavy metals, chemicals, viruses and bacteria rush through the gates to attack the kingdom and threaten the life of the King and Queen.

You deploy your defense against this attack by sending your knights, archers and ground troops, in the form of foods like pastured eggs, bone marrow, wild fish, mushrooms, probiotics and bright red, orange, yellow, green and blue fruits and vegetables.

The survival of your healthy cells and kingdom relies on your dietary deficiency, toxicity or both. 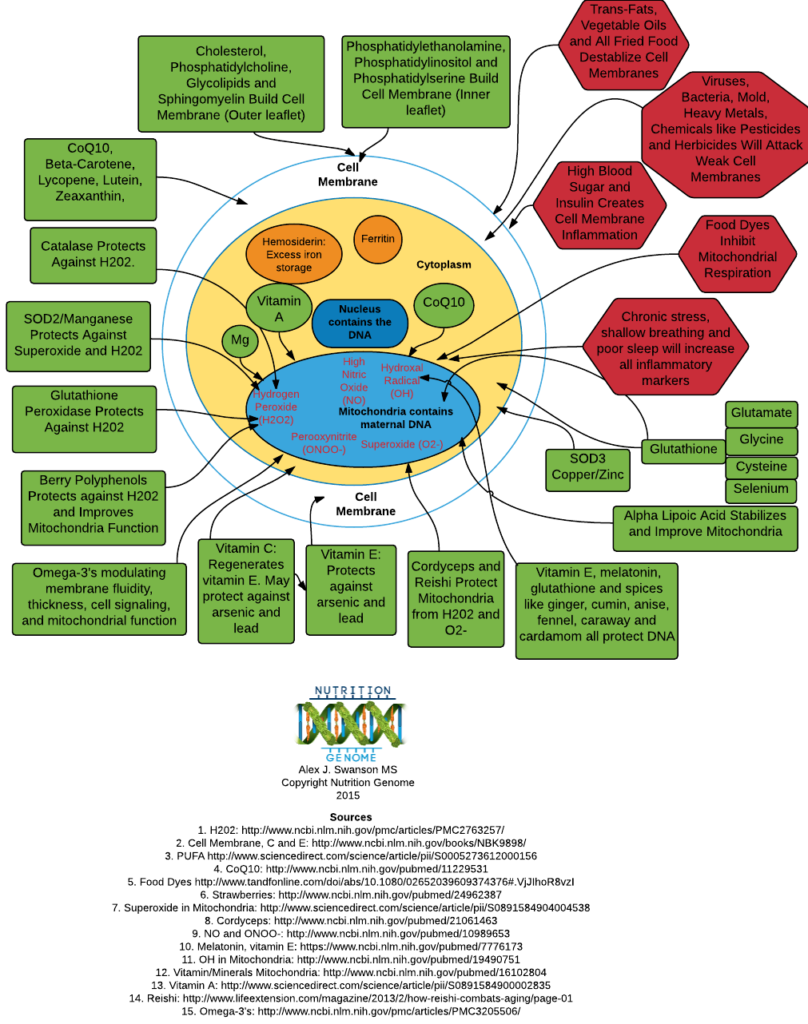 The Genetics of the Cell Membrane and Mitochondria

Superoxide Dismutase is an enzyme that protects cells from increased oxidative stress and free radical damage to cell structures like membranes, mitochondria, DNA, and proteins. SOD1 is located in the cytoplasm, binds copper and zinc, and is one of two isozymes responsible for destroying free superoxide radicals in the body. Mutations could lead to a decreased ability to destroy superoxide.

What does this mean? If you have a mutation in SOD1 or SOD3, you want to make sure you are getting adequate zinc and copper (zinc should be much higher, and most of us most likely have too much copper) in your diet to protect the outside of the mitochondria, and outside of the cell.

SOD2: Do Your Require More Manganese and Dietary Antioxidants?

SOD2 codes for mitochondrial manganese SOD (Mn-SOD), which catalyzes the dismutation of superoxides into water and hydrogen peroxide. Polymorphisms in SOD2 (+/- and +/+) are associated with reduced SOD activity. While this may increase some risk of oxidative stress, more clinical correlations have been observed for the (-/-) genotype. This genotype has specifically been associated with increased risk of cardiomyopathy.

Animal studies have found that intense exercise promotes an increase in myocardial MnSOD activity. This is significant because two recent studies reveal that increased MnSOD activity is essential to achieve optimal training-induced protection against both ischemia/reperfusion(IR)-induced cardiac arrhythmias and infarction.

SOD2 −1221G>A AA genotype carriers had a significantly increased risk for pancreatic cancer among those with a low dietary vitamin E intake but decreased risk among those with a high vitamin E intake. Although this genotype is less sensitive to antioxidant status compared to the (-/-) genotype, liberal consumption of dietary antioxidants in colorful vegetables and fruits is still recommended. Broad-spectrum antioxidant supplements may also be helpful, as well as manganese, which serves as a cofactor for SOD2.

Studies have found that in addition to folate, various antioxidant nutrients and phytochemicals are known to enhance DNA repair and reduce oxidative DNA damage, and such dietary contributions could theoretically compensate for inherited defects in repair mechanisms. Also, individuals with inherited polymorphisms that lower the activity of antioxidant enzyme systems such as manganese superoxide dismutase and glutathione peroxidase may have a higher requirement for dietary antioxidants to prevent DNA damage or cancer risk. Cordyceps improve the activity of SOD of red blood cells, brain and liver.

What does this mean? If you have this mutation, you need to focus getting manganese in your diet from clean mussels, clams, hazelnuts, pine nuts, pecans, macadamia nuts, almonds, walnuts, chickpeas (hummus), spinach, kale, black tea, blueberries, chocolate, and lentils. You also need to focus on all colors of the fruit and vegetable kingdom to effectively protect inside the cell membrane.

PEMT: Do Your Require More Choline?

Phosphatidylcholine is catalyzed by the enzyme phosphatidylethanolamine-N-methyltransferase (PEMT), which is induced by estrogen. Post-menopausal women and pregnant women are more susceptible to organ function due to a low-choline diet.

A common genetic polymorphism (rs12325817) in the PEMT gene can also increase this risk. Eighty percent of the women who were homozygous for the SNP manifested signs of choline depletion (liver or muscle dysfunction), relative to 43% of subjects carrying one copy of the variant allele and 13% of subjects without the SNP. Almost 75% of the North Carolina population in the United States has one variant allele.

What does this mean? If you have this mutation, you want to focus on choline-rich food including eggs, liver and bone marrow for healthy cell membranes.

BCMO1: Do You Require Vitamin A over Beta-Carotene?

What does this mean? If you have this mutation or poor thyroid health, you should be getting vitamin A in a pro-retinol form from eggs, liver and cod liver oil for protection inside the cell membrane.

CASR: Are You More Sensitive to Vegetable Oils and Calcium Supplementation?

Mutations in the CASR gene have been found to have the strongest association of higher serum calcium levels in individuals of European, Indian and Asian descent.

Polyunsaturated fats (vegetable oils), trans-fats, fried foods like french fries, chips or fried meat, powdered milk or powdered eggs, and smoking are connected to oxidized cholesterol (oxysterols), increasing sphingomyelin in the cell membranes of the coronary arteries. This leads to clogged arteries and enhances the interaction between the membrane and ionic calcium, thereby increasing the risk of arterial calcification. Normal levels of oxysterols in the plasma will not cause phosphatidylcholine to convert into sphingomyelin and therefore less calcium will bind to it resulting in less artery blockage.

What does this mean? Avoid all vegetable oils, fried foods, make sure your magnesium intake is higher than your calcium intake, get adequate vitamin K2 to promote healthy cell membranes.

SLCO1B1: Are  You at Risk for Bad Reactions to Statin Drugs?

Strong association for myopathy from Statin drugs including muscle damage, especially if you are female, older, lower body mass and have hypothyroidism. More than 60% of myopathy from Statin drugs could be attributed to the rs4149056 C variant in SLCO1B1. Statin drugs deplete CoQ10 levels, and in doing so increase the risk of mitochondrial dysfunction, and poor cell membrane health. The cells that work the hardest and requiring the most energy are the heart and muscle, and where you will find the most mitochondria.

What does this mean? If you have this mutation, talk to your doctor about alternatives to Statins for healthier mitochondria.

The Genome Application for the Cell Membrane and Mitochondria

From the diagram above, you will see how to strengthen cell membranes, protect their integrity and defend against intracellular and mitochondrial attacks. When your cell membranes and mitochondria are strong, it is difficult for viruses, bacteria, toxins, mold and chemicals to create disease.

Eat Dietary Cholesterol: Cholesterol is a major membrane constituent – roughly half – being present in about the same amount as the phospholipids. It maintains a balance of permeability and fluidity, and without it the cell membranes would collapse. Dietary cholesterol is found in pastured eggs, grass-fed meat, pastured dairy and wild fish.

Eat Choline:  Normal levels of oxysterols in the plasma will not cause phosphatidylcholine to convert into sphingomyelin and therefore less calcium will bind to it resulting in less artery blockage. Phosphatidylcholine comes from bone marrow and is created from choline-rich foods including eggs, grass-fed liver, grass-fed red meat, organic poultry and wild fish. Based on your gene mutations, you may require more choline.

Assess Zinc, Copper and Manganese Needs and Potential Deficiencies Based on SOD Function.

Get More Sleep: If you aren’t getting 7-8 hours of sleep per night, you are increasing mitochondrial inflammation. Melatonin is released by the pineal gland when it gets dark, inducing sleep.  Melatonin is a powerful antioxidant that concentrated in the mitochondria of the cell – especially brain mitochondria – making it neuroprotective. Melatonin decreases brain edema, decreases intercranial pressure and significantly increased superoxide dismutase and glutathione peroxidase in one study.

What if You Don’t Consume These Foods for Cell Membrane and Mitochondria Health? Can You Supplement?

If you do not eat eggs, liver or bone marrow, struggle to get enough fresh fruits and vegetables due to job/lifestyle, or genetic testing is not an affordable option at the moment, a foundational supplementation program should be utilized. You should first fortify the cell membranes with choline and support the whole cell and mitochondria with micro-minerals, DHA and vitamin C.