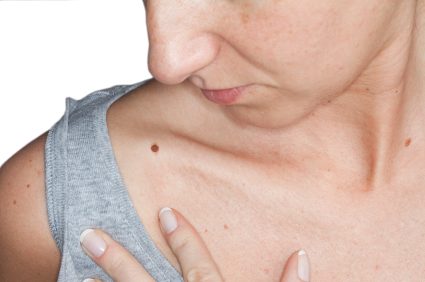 A study came out in 2015 that was able to show how vitamin C can epigenetically reprogram melanoma cells. While this study uses a lot of complicated jargon, I will attempt to simplify it.

Why We Have a High Vitamin C Requirement

Approximately 99% of animals produce their own vitamin C and do not require it from their diet. It is thought our ancestors lost this ability to produce vitamin C internally roughly 25 million years ago. In fact, many species, such as anthropoid primates, teleost fishes, guinea pigs, as well as some bat and Passeriformes bird species, have lost the capacity to synthesize it.

The reason we lost it has to do with an evolutionary gene mutation, much like photolyase that use to protect us from the sun. As this seems like a mutation that would have seemed unfavorable for survival, it somehow became a dominant trait and remains a mystery.

From the research theorizing how diet has changed skin color, I would place my bet on the climate changing the available plant life, increasing vitamin C consumption and causing a genetic mutation that told the body it is no longer needed. Yet over hundreds of millions of years, the majority other animals did not lose this ability; most likely due to not obtaining enough from the diet to trigger a mutation.

The Epigenetic Effect of Vitamin C on Melanoma

This study looked at the loss of 5-hydroxymethylcytosine (5-hmC) as a novel epigenetic hallmark for melanoma. 5-hmC is formed from the DNA base cytosine by adding a methyl group and then a hydroxy group. This makes a hydroxymethyl group on the cytosine, and can possibly switch a gene on and off epigenetically. Every cell contains 5-hmC, with the highest level in the nervous system.

This confirms Dr. Cheraskin, Ringsfor and Sisly who said “there are more than ten thousand published scientific papers that make it quite clear that there is not one body process (such as what goes on inside cells or tissues) and not one disease or syndrome (from the common cold to leprosy) that is not influenced – directly or indirectly – by vitamin C.”

Reduction in the 5-hmC levels has been found to impair self-renewal in embryonic stem cells. Embryonic stem cells appear to have a unique role in the epigenetic state of the genome. The decrease of 5-hmC is hypothesized to occur from the decrease in expression of  TET genes, which encode enzymes that catalyze the generation of 5hmC. Over-expressing the TET2 genes was shown to partially reestablish a normal 5hmC profile in melanoma and decrease invasiveness in rodents. Studies have established that TET genes require vitamin C as a cofactor to generate 5hmC.

The researchers tested to see if vitamin C would increase 5-hmC and lower melanoma growth and proliferation. The researchers concluded “our data support the idea that vitamin C treatment increases 5hmC content in melanoma cells while causing a decrease in tumor-cell invasiveness. Thus, vitamin C could be a potential epigenetic treatment for melanoma.

Vitamin C and Melanoma: How Much Should You Take?

The Dynamic Flow Model put forth by Dr. Steve Hickey and Dr. Hillary Roberts addresses the flaws in vitamin C research while also giving the best explanation as to the full mechanism of vitamin C in the body. “It is biologically useful to have a dynamic flow through the body, even though not all the ascorbate is absorbed. During times of stress or infection, ascorbate absorption is increased; the surplus dietary ascorbate then acts as a reservoir upon which the body can draw without delay.”

In animals when levels are low, they make more. Humans cannot do this, and continually need to fill the reservoir for protection against free radical tissue damage that can happen continually throughout the day from our lifestyle, environment and exercise frequency. Therefore, it stands to reason a surplus of vitamin C would be better than a deficiency, with the dosage being spread out throughout the day. The amount tolerated by most people is 2000mg to 6000mg orally while vitamin C IV’s can also be used for those needing higher amounts.