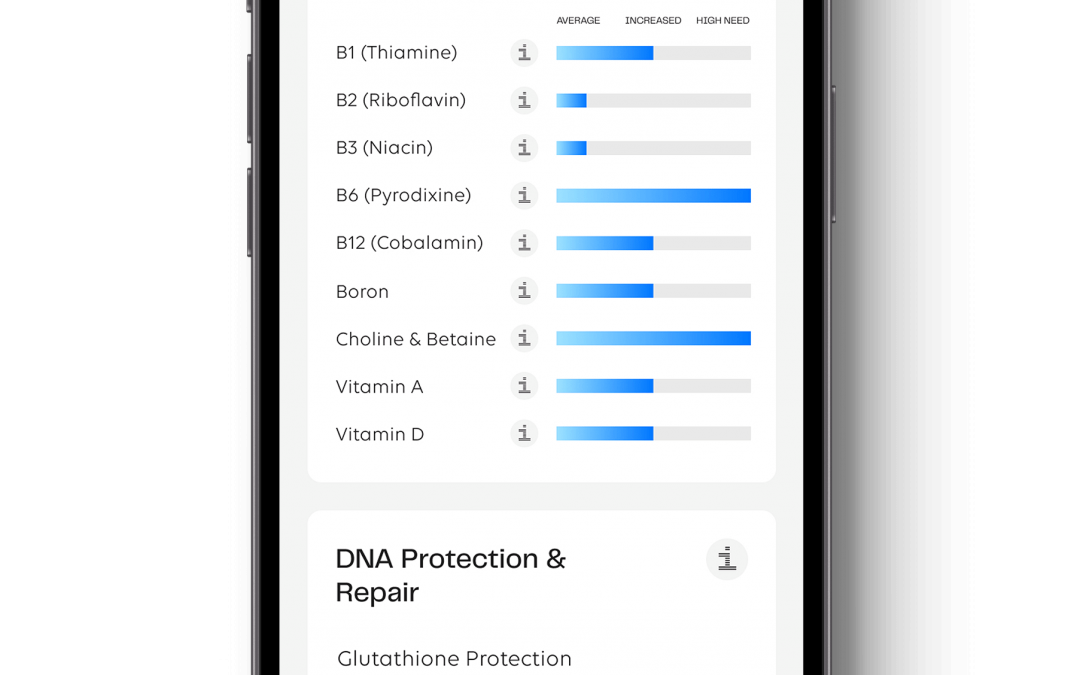 Infertility is defined as not being able to get pregnant (conceive) after one year of trying. For the last few decades, the rate of infertility in the United States has increased.

It has been estimated that between 16 and 25% of all couples have serious difficulty getting pregnant. Approximately 7.4% of women and their husbands in the United States are infertile and that the number of infertile people in the world may be as high as 15%, particularly in industrialized nations like the United States.

Can DNA-based nutrition testing help infertility? The Nutrition Genome Report can help you discover a high need for certain nutrients required for fertility, while also discovering higher sensitivities that could be preventing conception.

The Men’s Side of the Equation for Infertility

For men, what appears clear is that environmental factors are playing an extremely strong role in low sperm counts and poor swimmers. You can see this because the supplements that work for infertility are the same ones that are combating the chemical assaults on the body.

Male sperm counts are declining, and environmental factors, such as pesticides, exogenous estrogens, and heavy metals may be the cause. Several studies have been conducted in the Czech Republic regarding men living in two different locations, one more polluted than the other. Men who are exposed to higher levels of air pollution were more likely to experience abnormal sperm morphology, decreased motility, and an increased chance of DNA fragmentation.

For men, semen parameters begin a steady decline as early as age 35. After the age of 40, men can have significantly more DNA damage in their sperm, as well as a decline in both motility (40%) and viability (below 50%). Combine a later age with high DNA damage from chemical assaults, and your swimmers are not going to finish the race.

Physically active men who exercised at least three times a week for one hour typically scored higher in almost all sperm parameters in comparison to men who participated in more frequent and rigorous exercise. Moderately physically active men had significantly better sperm morphology.

Due to the design of the bike seat and tight spandex, it shouldn’t come as a surpise that bicycling more than five hours per week has been demonstrated to have a negative correlation with both total motile sperm counts and sperm concentration.

A study conducted in mice demonstrated that leptin was nearly five times higher in obese mice than lean mice and that the higher leptin levels corresponded to five times lower fertility in the obese mice. It was also noted that there was a down-regulation of the leptin receptors located on the testes, possibly indicating that leptin resistance could play a role in male infertility.

Studies have proven a number of nutritional therapies have been shown to improve sperm counts and sperm motility, including L-carnitine, L-arginine, zinc, selenium, and vitamin B-12. Numerous antioxidants have also proven beneficial in treating male infertility, such as vitamin C, vitamin E, glutathione, and coenzyme Q10.

One study found that an overabundance of ROS may compromise sperm function, including sperm motility, altering DNA and decreasing membrane integrity. A Cochrane review including 34 studies, determined that men who use oral antioxidants had a significant increase in live birth rate when compared to control. Antioxidants were also associated with a significant increase in pregnancy rate when compared to control.

Studies go back and forth as to which antioxidants have successful outcomes, and this is most likely due to individual biochemistry. The Nutrition Genome Report is a great way for you to understand where the biggest sources of inflammation are coming from, and what particular antioxidants are needed in higher amounts for optimal protection.

Males who experienced more than two stressful life events before undergoing infertility treatment were more likely to be classified below WHO standards for sperm concentration, motility, and morphology. In a study including 950 men conducted by stress such as a job, life events, and even social strain were seen to have a significant impact on sperm density, total sperm counts, forward motility, and morphology.

Semen parameters may potentially be linked to stress. Stress and depression are thought to reduce testosterone and luteinizing hormone (LH) pulsing, disrupt gonadal function, and ultimately reduce spermatogenesis and sperm parameters. Even just the perceived stress of providing a semen sample was reported to be negatively linked to overall semen quality with a 39% decrease in sperm concentration, 48% decrease in motility, and worse overall semen parameters on the day of oocyte retrieval.

One study evaluating 52 men demonstrated that men who carried a cell phone around the belt line or hip region were more likely to have decreased sperm motility compared to men who carried their cell phones elsewhere or who did not carry one at all.

One gene being explored for electrical sensitivity is CACNA1C, a calcium voltage-gated channel which mediates calcium inside the cell. Too much calcium is excitatory and harmful, which is what happens with glutamate stays too high for too long.

The Women’s Side of the Equation for Infertility

When under the age of 30, a woman’s chances of conceiving may be as high 71%; when over 36, it may only be 41%. The number of infants born begins to exponentially decrease after the age bracket of 35–39.

For women, being underweight and having extremely low amounts of body fat are associated with ovarian dysfunction and infertility. Approximately 20.7% of infertile women seeking intrauterine insemination (IUI) had also been diagnosed with an eating disorder.

Studies have found that folate, vitamin B6, vitamin C, vitamin D, vitamin E, iodine, selenium, iron, and DHA might have a positive impact on infertility treatment on female fertility. Other research has found magnesium to be a very key player in female fertility.

Women who take multivitamins may be less likely to experience ovulatory infertility; women who take six or more tablets had the lowest relative risk for infertility. This shows you how important supplementation can be.

Results from a study showed that the group receiving vitamin C had an increase in progesterone levels. The rate of pregnancy was significantly higher in the vitamin C group: 25% within six months, while only 11% of the untreated women became pregnant in the same time period. Large quantities of ascorbic acid are utilized by the female during conception and are necessary to formation and integrity of the fetal membranes. Research suggests vitamin C supplementation may also help prevent birth defects.

Certain variants in COMT, NOS, SHBG and SOD can increase your need for vitamin C.

For those of you familiar with MTHFR 677, you know how important methylfolate is for fertility. You also know why it is so important to avoid supplements and processed foods with folic acid. But why is folate so important for fertility? I will explore this more in depth with its own article.

One one study, six women with a history of unexplained infertility or early miscarriage and who had failed to normalize their red cell magnesium (RBC-Mg) levels after four months of oral magnesium supplementation (600 mg/day) were investigated for red cell glutathione peroxidase activity.

They were compared with six age-matched women with a history of unexplained infertility or miscarriage who did normalize their RBC-Mg levels on magnesium supplementation. The six non-normalizers had significantly lower glutathione levels than the six normalizers.

After a further two months of 200 micrograms daily oral selenium as selenomethionine and oral magnesium supplements, all six women normalized their magnesium and RBC-selenium levels. All 12 previously infertile women have produced normal healthy babies all conceiving within eight months of normalizing their RBC-Magnesium levels.

Selenium ranges widely in our soil and one of the best sources is from the sea. Due to pollution, our seafood consumption has dropped dramatically. If you have certain gene variants in glutathione, you may have a higher need for selenium to neutralize chemical assaults.

One of the most important genes for magnesium is COMT, which requires magnesium and vitamin C to work optimally. Certain variants increase your need for magnesium to modulate dopamine, adrenaline and estrogen. The US government study often cited shows 68% of Americans are deficient in magnesium based on dietary intake (which is high to begin with) is incredibly inaccurate based on the percentage of those with the numerous habits that deplete magnesium. Read more about magnesium deficiency here.

While exercise is beneficial for fertility, vigorous exercise for women at a normal weight may be preventing pregnancy. According to a study led by U.S. and Danish researchers, moderate physical activity was associated with a small increase in fertility rates amount all women, but higher levels of vigorous exercise were associated with lower fertility rates in normal-weight women, but not over-weight or obese women.

Physical activity has been shown to confer a protective effect on fertility when coupled with weight loss in obese women. A study examining 2,232 women undergoing in vitro fertilization (IVF) found that women who engaged in cardiovascular exercise for 4 hours or more per week for as little as one year prior to the treatment had a 40% decrease in live birth rate. as well as higher risks of cycle cancellation and implantation failure.

How Food Sensitivities May Increase Miscarriages

From an immunological point of view, an embryo and sperm cell are foreign bodies. Our immune systems, however, are programmed to distinguish between a foreign body and a sperm cell or embryo.

A normal and healthy immune response to an embryo or sperm cell is orchestrated by Th2 cytokines. They suppress your killer cells (that’s what they are called) to leave the embryo unharmed. An abnormal immune response to the implantation of the fertilized egg is orchestrated by Th1 cytokines. Rather than suppressing your killer cells they stimulate their activity. This can lead to defects and the loss of the fetus.

Alcohol depletes B1, folate, vitamin C, zinc and disrupts intestinal bacteria. At a higher alcohol intake, infertility levels go up. If you are more prone to low levels of these nutrients due to various genes, and are sensitive to heavy metals and pesticides due to variants in MTHFR 1298 and PON1, it stands to reason that your fertility will be more affected by alcohol intake.

Non-organic wine may have concentrated amounts of pesticides, insecticides and fungicides, while non-organic beer may be high in glyphosate (Round Up). In California, conventionally-grown wine grapes received more pesticides than almonds, table grapes, tomatoes or strawberries.

Women who experienced hangovers were more likely to be infertile than women who did not experience hangovers, suggesting that the amount of alcohol consumed does matter. Amounts of alcohol ranging from one drink a week to 5 a day can have various effects including increasing the time to pregnancy, decreasing the probability of conception by over 50% and decreasing implantation rate.

The Nutrition Genome Report is an excellent way to test for folate, vitamin B6, vitamin C, vitamin D, vitamin E, iodine, selenium, iron, and DHA requirements, giving a custom grocery list and toxic sensitivity chart for both men and women to help increase your chances of conception.