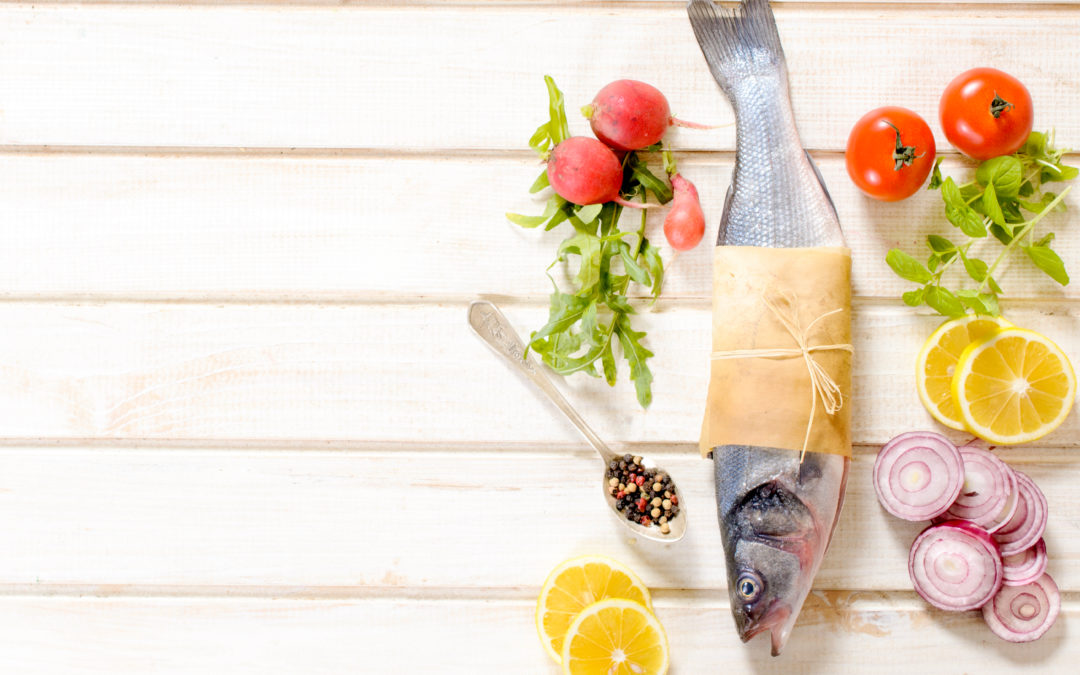 Cancer is the second leading cause of death in the world as of 2018, with breast and lung cancer at the top for most common cancers. One-third of those deaths attributed to diet, environment and lifestyle factors, and it is estimated that up to 50% of cancers could be prevented by avoiding risk factors and implementing proven strategies. While we race for the cure, genetic testing for breast cancer genes and genes connected to breast health are helping us race for breast cancer prevention.

BRCA1 and BRCA2 gene mutations are tested through your physician (not in the Nutrition Genome Report), but we often discuss these genes in context with other genes in the Nutrition Genome Report to help women design a plan of action. The BRCA mutations have been associated with a 45-70% lifetime risk of breast cancer. However, as many of you have learned through epigenetics, these percentages are modifiable and are not set in stone based on diet, exercise, environment, other genes, and lifestyle. You can read more about BRCA1 and BRCA2 here.

When it comes to determining the cause of breast cancer, there are individual epigenetic complexities that make it difficult to narrow down the exact reasons for each case. There are cases where it appears someone has done everything right, yet cancer still develops due to biological and biochemical flaws.

What we hope to achieve with genetic testing is an understanding of each individual’s susceptibilities with supporting research, so that we can begin to implement targeted dietary and environmental choices that are tailored to the individual for breast cancer prevention. If we can take all of the known risk factors and determine the individuals’ main risks, find the genetic “chinks” in the armor, and customize their program to turn these weaknesses into strengths, we should be able to make dramatic strides in the preventative sector.

Here is a list of the top risk factors:

Risk factors for Invasive Ductal Carcinoma include a family history of ductal carcinoma breast cancer, estrogen dominance from oral contraceptives, not having children, having a first child over the age of 35, breastfeeding less than 12 months, and genetic mutations in BRCA1 and BRCA2. There are still a lot of questions to answer in regards to how Invasive Ductal Carcinoma can occur and there are likely numerous variables case to case.

As more women are delaying pregnancy to the late ’30s and early ’40s, more attention needs to be paid to breast health. According to the Susan G. Koman Foundation, women who have their first birth at 35 years of age or younger have a reduced risk of breast cancer compared to those older than 35, and each additional birth reduces the risk even further (especially when the births are close together).

Women who give birth for the first time after age 35 are approximately 40 percent more likely to get breast cancer than women who have their first child before age 20. The current hypothesis for this is that DNA damage accrues as we age, and the rapid growth of these damaged cells during pregnancy can tip the scales towards increased risk.

In each section of the Nutrition Genome Report, you can apply the results of certain genes towards breast cancer prevention. When you have certain variants in these genes, it helps you narrow down exactly where you need the most focus. For example, you may find you have a much higher need for dietary choline than the average women due to variants in PEMT, and a much higher sensitivity to dioxins (high in animal fat like dairy) due to variants in GSTM1, GSTP1, CYP1A1, CYP1A2, or CYP1B1, requiring more strategies to help counteract the toxic effects and assist detoxification.

BCMO1: Variants reduce the ability to convert beta-carotene to vitamin A, increasing the need for animal-based vitamin A. Vitamin A modulates the epigenome and reverses pre-cancerous breast cells to normal cells, but not fully cancerous cells making it most effective for prevention.

PEMT: Variants in PEMT increase the need for dietary choline and betaine. Low choline intake decreases the ability of the body to detoxify carcinogens.  One study found that a higher choline intake was associated with decreased breast cancer risk and a very low choline intake disrupted BRCA1 function.

BRCA1 expression is also critical for mediating the biological impact of vitamin D3 in breast tumor cells, which means you have to support BRCA first before vitamin D can do its job. The optimal range appears to be between 35 and 50 ng/ml. Vitamin D can also inhibit the estrogen pathway and reduce the expression of the aromatase gene, a gene encoding an enzyme that converts androgens to estrogens.

PON1: Pesticides have been linked to suppressing vitamin D levels, and variants in PON1 may increase this sensitivity.

It would appear hypothetically that having your first child in your late 30’s while supplementing with synthetic folic acid combined with low zinc, selenium, and choline intake would be a recipe for aggressive breast cancer growth in those genetically susceptible.

ATM: ATM is a DNA repair gene that responds favorably to folate. Variants in ATM may increase the need for folate, especially in those with high blood sugar, BRCA mutations, and a family history of breast cancer. Fasting for 13 hours or more from dinner to breakfast (BRCA mutations reduce DNA repair capability, and fasting improves DNA repair). Fasting less than 13 hours increased breast cancer reoccurrence by 36% in one study.

GSTM1, GSTP1, and GPX1: All genes should be assessed for glutathione levels the master antioxidant system and protection against chemicals and toxins. Selenium is the major co-factor of glutathione, and GSTM1 and GSTP1 are connected to the lungs and breasts.

FUT2: The homozygous genotype for FUT2 increases the need for prebiotic fiber from a diversity of plants for a healthy microbiome, estrogen levels, and B-vitamin production. Research has proposed that the microbiome contributes to breast carcinogenesis by modifying systemic estrogen levels. Antibiotics destroy the microbiome and chronic use has been correlated with an increased risk of breast cancer.

Consuming 27 or more different fruits and vegetables per week (reduces risk by 73% for those with BRC1 and BRCA2 mutations). Adults in the U.S. consume fruit an average of 1.1 times per day and vegetables 1.6 times a day!

MAO: The TT genotype encodes for the slow activity of the enzyme, requiring more B-vitamins to assist this estrogen detoxification.

COMT: The homozygous H62H and V158M genotypes encode for the slow activity of COMT, increasing the need for magnesium to assist estrogen detoxification. If you are homozygous AA for V158M, you may be more sensitive to catechols in green and black tea, wine, and coffee. It doesn’t mean these need to be avoided, but that you may obtain higher benefits with less and sensitive to more. For example, green tea has been found to be beneficial for breast cancer prevention in the AG and AA genotype because these individuals retained the polyphenols the longest. The wild type may need more to achieve the same benefit.

CYP1A1, CYP1A2, and CYP1B1: The heterozygous and homozygous variants in these genes may increase the activation of certain carcinogens from fried meat, dioxins, vegetable oils, cigarettes, nitrosamines and aflatoxin that damage the breast tissue. in this estrogen pathway.

Optimal levels of iodine and vitamin D help modulate the estrogen pathway and help prevent cancerous growth. Iodine deficient breast tissue exhibits early markers of breast cancer, and 30% of iodine stores are in the breast tissue. One of the hypotheses that Japanese women have a lower risk of breast cancer is due to a higher iodine intake, and their breast cancer rates climb when they immigrate. Vitamin D levels should be between 35-50 ng/ml, ideally on the upper end of this range.

SHBG: Variants in SHBG increase the need for fiber for women to assist estrogen metabolism. White button mushrooms contain an anti-aromatase inhibitor that inhibits estrogen biosynthesis and were found to inhibit the growth of breast tumor cells.

ESR2: ESR2 is a tumor suppressor gene for estrogen receptor beta and expressed in the breast tissue. Variants in this gene may increase the need for phytoestrogens like flax, iodine, and apigenin rich foods like celery and parsley. Daily flax seed intake rich in fiber and phytoestrogens (1 tablespoon or more) and enoki mushroom have both been found to inhibit estrogen receptor positive and negative breast cancer cells. High luteolin (celery, broccoli, thyme, and parsley) and blueberry intake, both found in research to stop triple negative breast cancer cells in their tracks.

ESR2, CYP1A2, GSTM1, and GSTP1 all are associated with dioxin detoxification. Avoiding or minimizing dairy (or being careful to choose clean sources) and other sources of dioxins for BRCA mutations should be a priority (see our previous article, Dioxins and the BRCA Genes: What You Need to Know to learn more about the BRCA genes and triple negative breast cancer).

TP53: TP53 is a tumor suppressor gene, and variants may increase the need for both zinc and selenium. Zinc also improves VDR function for vitamin D, glutathione, cell membrane health and PPAR-alpha.

ACSL1: The GG genotype may be more sensitive to saturated fat from red meat and dairy for fasting glucose and insulin levels.

APOA2: The GG genotype increases the sensitivity to saturated fat over 22 grams for weight control.

TCF7L2: Variants in TCF7L2 increase the sensitivity to sugar and refined grains for blood sugar levels, and variants in this gene have been connected to breast, prostate and colon health.

ADIPOQ: Adiponectin has been found to be an independent risk factor for breast cancer but not conclusive. Variants in ADIPOQ may lead to lower levels of adiponectin. Breast cancer patients responded favorably to 750mg of ginger and swimming 4x a week to increase adiponectin and glutathione levels. There is also a synergy with rosehips and adiponectin levels. Rosehip extract (1mg) reduced the growth of triple negative breast cancer cells by 50% and limited its spread by 45%.

FTO: The homozygous genes affect the hunger hormone ghrelin, requiring more protein and fiber in the morning to prevent overeating throughout the day.

PPAR-alpha: Variants in PPAR-alpha may have a poor response to longer fasting times and require more dietary activation to inhibit tumor growth. PPAR-alpha induces apoptosis and prevents cancerous growth in human breast cancer cells, and the activation of PPAR-alpha inhibits tumor growth. See the Nutrition Genome Report for all of the dietary strategies to activate PPAR-alpha.

How to Apply Your Results from the Nutrition Genome Report 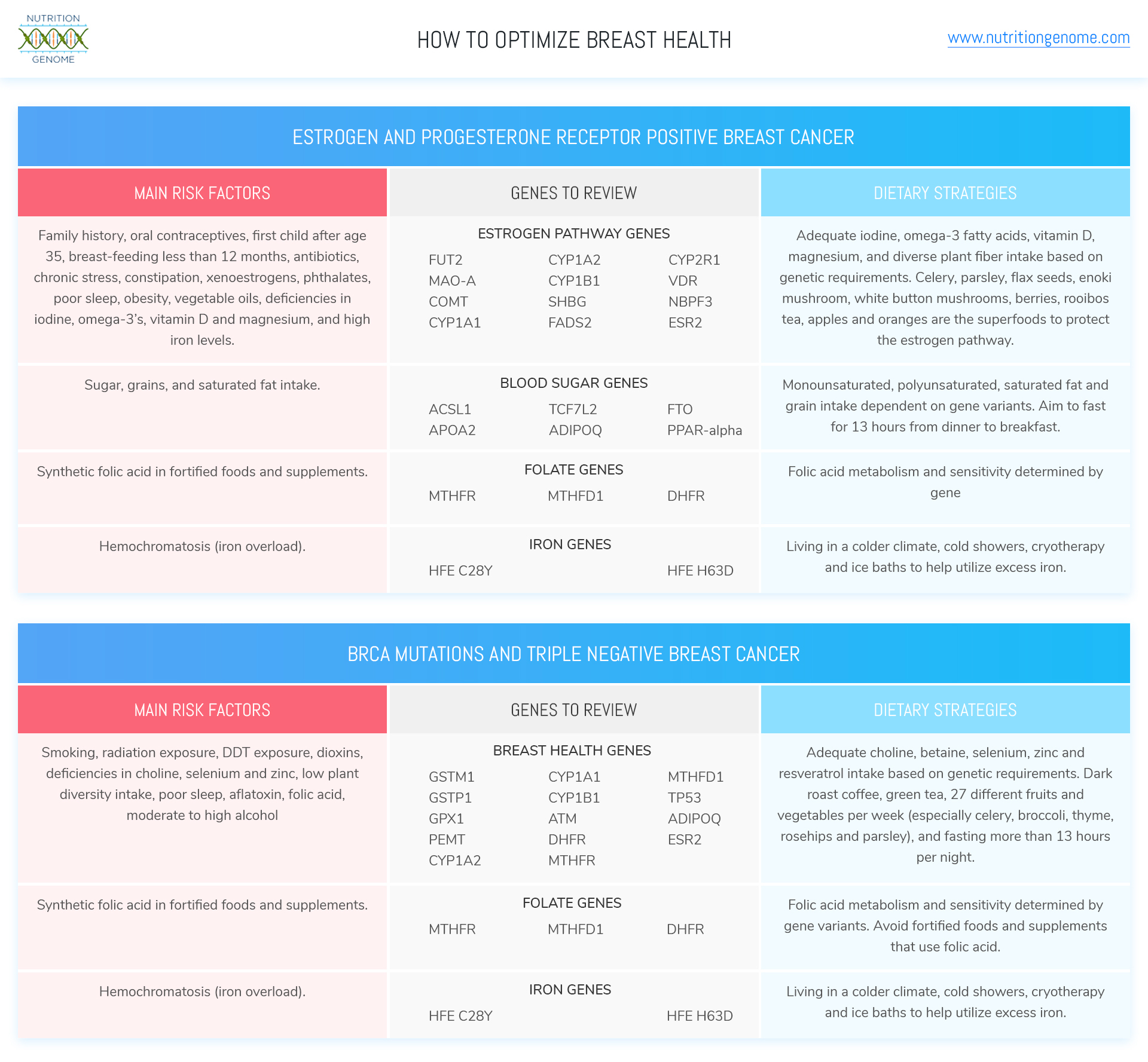 *All of the research in this article is for educational purposes only. It is not meant to be considered medical advice. You should speak with your doctor regarding any treatment or application of the information provided here.