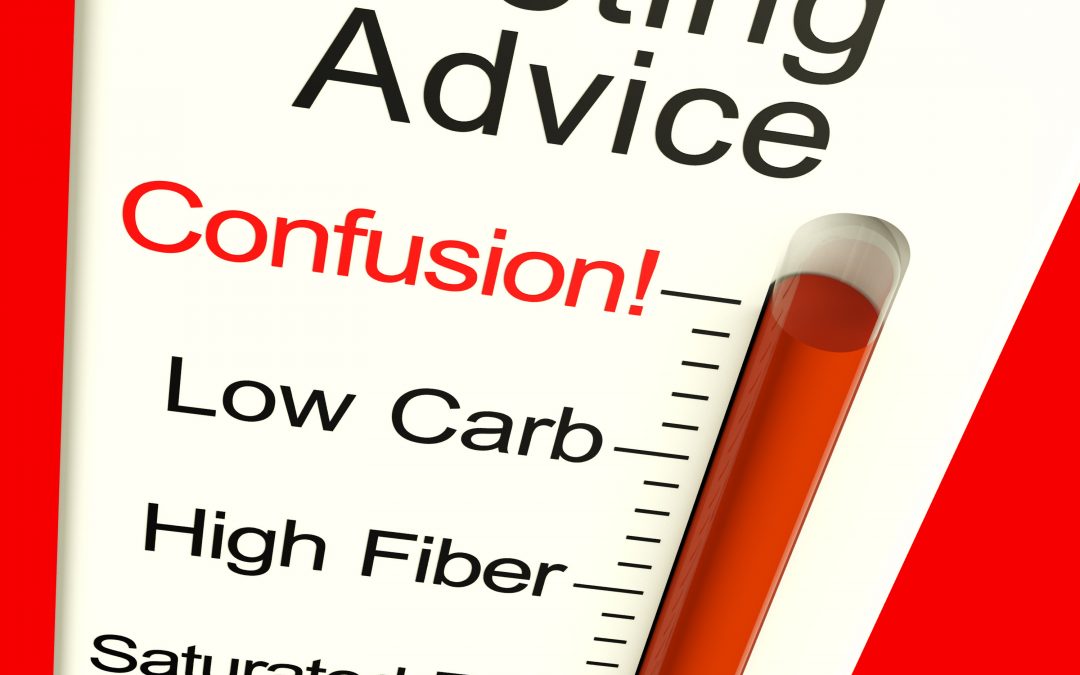 One of the main pillars of Nutrition Genome is the understanding that one diet does not fit all because we are all different. It is also why so many studies and sources of dietary advice seem to continually contradict. DNA-based nutrition testing has helped us determine why there are differences in protein, fat and carbohydrate metabolism based on ancestral migration routes in the northern and southern hemispheres.

Diets Around the World

If you look at diets around the world, the protein, fat and carbohydrate ratios range based on the environment. Traditional diets show that as you get closer to the equator, you see a shift in more plant foods. As you get farther from the equator, you see more animal and fat consumption. Our bodies respond to the climate as well. For example, spending time in the sun depletes folate, increasing the need for folate-rich plants. Fat and iron-rich foods help us stay warm in cold, northern climates.

Agriculture has created a manufactured diet full of foods from every climate that we can ship from all over the world. This leads to dietary confusion of what is seasonal and best for you. We have the choice now of a high-fat diet or plant-based diet despite our environment or time of the year. While it seems more obvious that plant intake would change based on the season, fat intake has been more debated. Take a look below at the percentage of fat on a caribou throughout the year from this study: 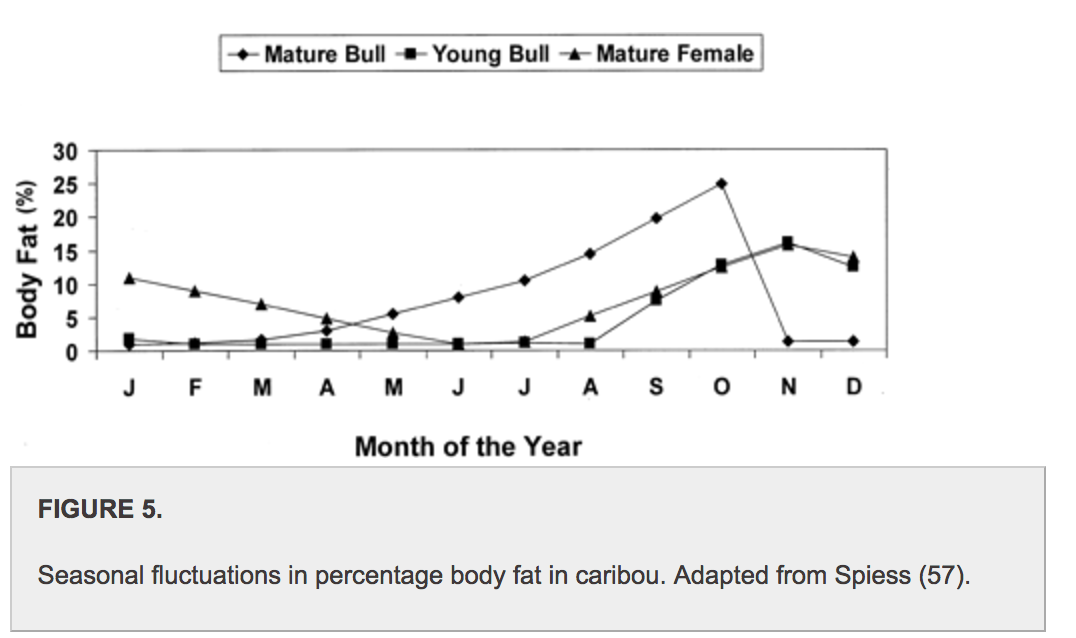 What we can see here is that fat is accumulated by the caribou to prepare for winter and is leanest in the spring. Therefore, whether our hunter-gatherer ancestors hunted in the spring or the fall in an environment like Alaska or Canada would determine the fat available on the animal. Interesting enough, many nuts ripen in the fall, increasing our fat intake at that time. So not only would our geography determine fat and plant intake, but the time of the year.

What is the Best Protein, Fat and Carbohydrate Ratio for You?

Each summer, interest begins to rise for the ultimate diet for getting in the best shape. The majority of people are attracted to the extremes of high-fat diets, high protein diets, and extremely low carbohydrate diets in the hope of getting extreme results quickly. The problem is that some people can find themselves having elevated glucose or cravings with a higher saturated fat intake, fatigue and digestive strain from high protein diets, and thyroid dysfunction, fatigue, and depression from low carbohydrate diets.

The Nutrition Genome Report looks at multiple genes that can help give you clues into unlocking your unique metabolism. While digestive enzyme levels, the microbiome, and other epigenetic health changes must be taken into consideration, the following genes can be a useful guide to understanding your macronutrient metabolism.

For those with a homozygous MTHFR 1298 or 677 gene, a high protein intake may deplete BH4 levels with insufficient folate, causing higher ammonia and fatigue. If you look at the countries where the highest percentage of this genotype resides, you will find all temperate to warm climates with a higher plant intake. These people tend to do best on smaller to moderate portions of protein at one sitting depending on their exercise levels.

The ACAT gene is responsible for the conversion of protein and fat into energy with the help of B-vitamins 1-5. Variants in this gene may increase the sensitivity to low B-vitamin levels induced by medications, excess coffee, alcohol, and flour-based foods, leading to poor protein metabolism. Ensuring adequate B-vitamin intake can help protein metabolism.

The TCF7L2 gene is known for its association to Type 2 diabetes and responds best to a diet higher in protein and lower in grain-based carbohydrates. This gene is discussed more below in the carbohydrate section.

The FTO gene focuses on ghrelin levels, known as the hunger hormone. Ghrelin is highest in the fasting state, before meals, and at night, falling within one hour of a meal. Research has found that a breakfast centered around protein and fiber-rich carbohydrates (especially prebiotic fiber) was the most effective at suppressing ghrelin levels throughout the day, while also focusing on polyunsaturated and monounsaturated fats.

1. For those with a homozygous APOA2 gene, saturated fat intake (especially dairy) does not send the same signal to the brain as people with the normal or heterozygous APOA2 variant that you are full. So what happens is these foods make you want to keep eating. Therefore, a diet higher in saturated fat is not recommended for this genotype.

2. The ACSL1 gene plays an important role in fatty acid metabolism and triglyceride synthesis. Disturbance of these pathways may result in dyslipidemia and insulin resistance, hallmarks of the metabolic syndrome. Individuals with the homozygous ACSL1 gene have been found to be more insulin resistant when their saturated fat intake was over 35%. However, when the type of fat shifted to monounsaturated fat and polyunsaturated fat (fish, poultry, nuts, seeds, olive oil, avocado), the risk of metabolic syndrome was completely eliminated.

3. The SLC22A5 gene is responsible for L-carnitine production, which is a fatty acid carrier and increases the sensitivity of the cells to insulin. People with multiple homozygous genes in this category needs to focus on magnesium and B-vitamins 1-5, the co-factors for this gene. Depletion of both will affect oxidative stress from fat. This is one of the ways magnesium helps lower oxidative stress and regulates blood sugar levels. What fats are highest in magnesium? Nuts and seeds. Coconut oil does not require acetylcarnitine transferase to cross the inner mitochondrial membrane, and therefore, is a good fat for those with multiple homozygous variants in SLC22A5.

4. The PPAR-alpha gene plays a vital role in fatty acid metabolism and ketosis and is considered one of the most crucial targets for ameliorating abnormalities with triglycerides, HDL, LDL, VLDL, and ApoB. Those with variants in this gene have been found to have a poor response to fasting due to low ketone bodies and the research has stated that this genotype may explain diverse reactions to the ketogenic diet.

PPAR-α agonists activate the gene, promoting the uptake, utilization, and breakdown of fatty acids. The activation of PPAR-α has also been demonstrated to inhibit tumor growth and angiogenesis.

5. The FTO gene gives you more data regarding saturated fat metabolism, especially if you are prone to weight gain. The FTO gene is highly expressed in the brain regions controlling feeding and energy expenditure and is one of many genes associated with being a risk factor for obesity, especially abdominal weight. Polymorphisms in the FTO gene have been shown to cause higher ghrelin levels (hunger hormone) in many populations, which can create a greater appetite and the potential for overeating.

The FTO rs9939609 homozygous AA genotype has been found to preferentially select high calorie/high-fat food compared to the normal TT genotype. Multiple studies have shown that a high dietary saturated fat intake (higher than 15.5% energy) and a low dietary polyunsaturated fat intake further increased the risk of being overweight or abdominally obese for the AA genotype.

6. The ACE1 gene is linked to saturated fat intake, ACE1 levels and elevated blood pressure. The homozygous carriers (GG) of the variant had higher baseline ACE concentrations and additionally showed a 2-fold increase in ACE concentrations in response to the high saturated fat diet as compared to the AA and AG genotype. GG carriers also responded with higher systolic blood pressure as compared to AA and AG carriers.

7. The AGTR1 gene is connected to fat intake and insulin resistance, triglycerides, VLDL, adiponectin, and the risk for NAFLD. Dietary fat intake and high blood pressure both have roots in geographical latitude. Distances further from the equator and fewer hours of sunlight have been associated with higher blood pressure levels. Being closer to the equator, higher temperatures and longer hours of sunlight have been associated with lower blood pressure.

The type and amount of dietary fat changes with latitude and season and carbohydrate intake have been found to be higher the closer you get to the equator, and lower the further you go north of the equator. While there is still speculation at this point, based on other genes like MTHFR and Tp53 and their correlation to latitude, the homozygous genotype in AGTR1 may point towards ancestry closer to the equator with a diet lower in fat and higher in plant intake.

The TCF7L2 gene is a new addition to the Nutrition Genome Report and I refer to it as the “Paleo” gene. The TCF7L2 gene has become the strongest indicator of Type 2 diabetes and gestational diabetes risk for multiple ethnicities in studies.

This gene is unique in its relation to Type 2 diabetes because people with variants in TCF7L2 may not exhibit risk signs like obesity. In fact, they may have a low body mass index (BMI) and low triglycerides. This is because the gene isn’t connected to insulin sensitivity, but to the sensitivity of pancreatic β-cells to gut hormones called incretins that regulate the amount of insulin secreted.

So why do I call it the “Paleo” gene? One study found that the consumption of meals based on the Paleolithic diet (no grains or dairy) focusing on fish, polyphenol-rich foods, fiber-rich vegetables and spices high in phytochemicals resulted in significant increases in incretin and increased perceived satiety (feeling full). All three test meals were normalized to contain 50 grams of carbohydrates. Sufficient protein in particular shows promise in the management of type 2 diabetes by stimulating incretin, insulin secretion, and slowing gastric emptying.

If you have Type 2 diabetes in your family and a heterozygous or homozygous TCF7L2 gene, your body may respond best to a diet that either eliminates or minimizes grain consumption, and possibly dairy based on other genes.

FUT2: Variants in the FUT2 gene show a higher need for prebiotic-rich fiber foods for healthy bifidobacteria populations in the gut and B12 absorption. A combination of variants in TCF7L2 and/or FTO, and FUT2, would point towards the need for higher protein and fiber in the morning for blood sugar, ghrelin, and healthy gut bacteria

SHBG: While different recommendations are set for males vs. females, genetic variants in SHBG (and your current tested level of SHBG from a blood test), can help determine if you need less or more fiber for healthy hormone levels.

Summary for DNA Testing for Macros

Clinical work has confirmed the accuracy of the protein, fat, fiber and carbohydrate gene breakdown, and when changes are implemented, there is a successful outcome. Looking at your unique biochemistry can help decipher how you will respond to all of the diets that are touted to be the best. Whether it is a Paleo diet, the Mediterranean diet, high-fat or plant-based diet, your genes can give you a deep understanding on what is the best fit for you.