Are Hypothyroidism and Hashimoto’s Disease Genetic? 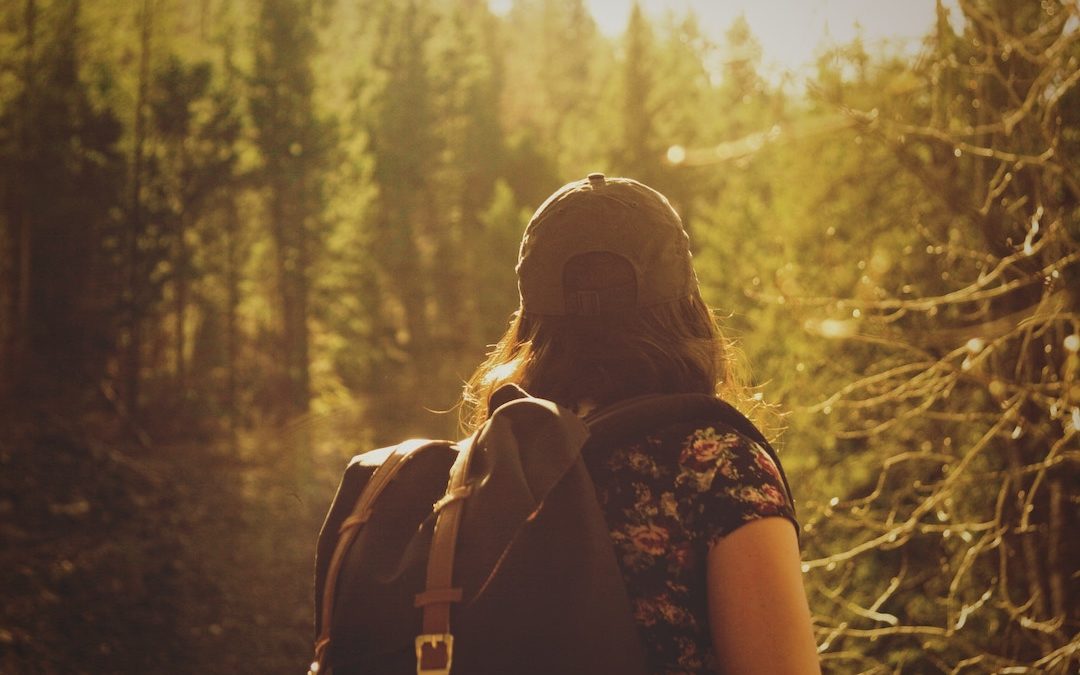 What is Hypothyroidism and Hashimoto’s Disease?

The thyroid gland is a butterfly-shaped gland on the lower neck, responsible for growth and development, body temperature, heart rate, menstrual cycles, and weight. Hypothyroidism is when the thyroid is not producing enough thyroid hormone, which can affect a wide range of physiological functions. Common symptoms include cold extremities, poor digestion (B12 and calcium absorption go down due to low stomach acid), weight gain, constipation, high LDL, poor concentration, excess sleep, depression, low sex drive and/or infertility and fatigue.

Hashimoto thyroiditis, also known as Hashimoto’s disease, is an autoimmune disorder and form of chronic inflammation that can damage the thyroid, reducing its ability to produce hormones. Hashimoto’s is the leading cause of hypothyroidism and occurs in 1-2% of the population, mostly in women (highest in whites), and usually appears in mid-adulthood, but it can still occur earlier or later in life.

While there is still some mystery regarding all of the causes of Hashimoto’s disease, there appears to be both a genetic and epigenetic component. Researchers have hypothesized that there are dozens or hundreds of different factors influencing the risk of each individual case. These factors might differ between individuals.

The following has been found to contribute to the risk of Hashimoto’s disease and hypothyroidism:

As mentioned earlier, numerous genetic studies have been done on Hashimoto’s without a clear pattern and appear shrouded in mystery. Typically, these are polymorphisms in genes that play an important role in the activation and suppression of lymphocytes (white blood cells). However, it is possible that this approach is too limited for a disorder that is multi-faceted and may require the triangulation of hundreds of variables, including genes related to nutrigenomic function.

What we are offering is a new approach utilizing nutrigenomic research from the Nutrition Genome Report associated with thyroid health, inflammation and estrogen regulation to help you or a loved one manage and improve symptoms for Hashimoto’s disease nutritionally. 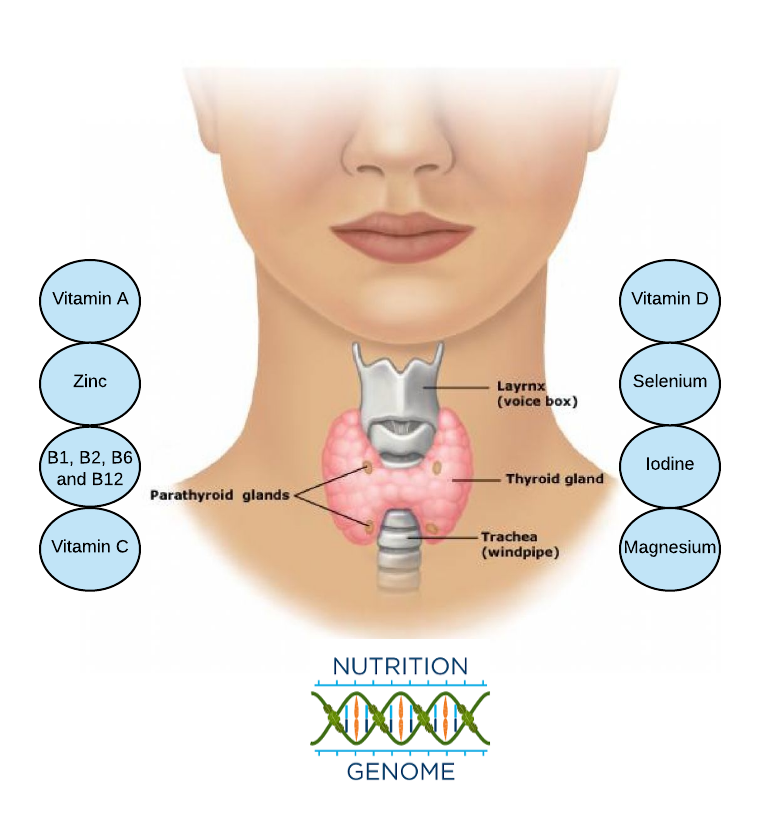 Variants in BCMO1 reduce the ability to convert beta-carotene to vitamin A, increasing the need for animal-based vitamin A. Vitamin A deficiencies in autoimmune thyroiditis may be associated with decreased iodine absorption by the thyroid gland and limited synthesis and secretion of thyroid hormones.

It has been proven that a diet with a reduced content of both vitamin A and iodine may contribute to an increased risk of hypothyroidism. One study found a strong correlation was found between the size of the thyroid and the severity of vitamin A deficiency. Studies carried out in children also have shown that a severe deficiency of iodine and vitamin A increases the secretion of TSH and enlarge the thyroid.

A strong correlation was found between the size of the thyroid and the severity of vitamin A deficiency. In a 4-month, randomized, double-blind study, eighty-four pre-menopausal women supplemented with vitamin A. The results showed a significant reduction in the serum of TSH levels and may, therefore, reduce the risk of subclinical hypothyroidism.

Variants in the CYP2R1 gene have been shown to cause lower baseline vitamin D levels. Vitamin D influences immune cells and a deficiency may affect the immune system and is considered an environmental factor in the development of Hashimoto’s.

One study found that the prevalence of vitamin D deficiency was significantly higher in patients with autoimmune thyroid disease (72%) than in healthy patients (30.6%), an increase in TSH values, and an inverse correlation with vitamin D deficiency and anti-TPO antibodies. Another study found that vitamin D supplementation for 4-months dropped anti-TPO antibodies by 20.3%. More research is needed to replicate these findings.

Zinc/Selenium and the Tp53 Gene
DNA Damage, Protection and Repair Section of the Nutrition Genome Report

The Tp53 gene is a tumor suppressor gene responsible for DNA repair. Variants in the Tp53 gene are found in those from higher latitudes like northern Europe and is connected to a trade-off of increased fertility in cold climates, but lower DNA repair. Zinc and selenium both help stabilize the Tp53 gene function. Zinc deficiency has been found to increase the risk of infection and intestinal permeability, which are two risk factors of Hashimoto’s disease.

According to military records, Hashimoto’s disease is much higher in whites than other ethnicities. Researchers haven’t been able to explain this stark difference.

One clue may be the Tp53 gene. According to one study in a Caucasian population, there is a link to the Tp53 gene rs1042522 and Hashimoto’s disease. The researchers found that in Hashimoto’s patients, only 11.4% had the GG genotype, 24.0% had the heterozygous CG genotype and 64.6% had the homozygous CC genotype (CC is highest in those from northern climates).*

*We have corrected the alleles used in the study per the 1000 Genome Project and verified by geneticists. The linked research study used the reverse strand with the opposite alleles, but what we have reported on is correct.

Oxidative stress and inflammation play a pivotal role in the pathogenesis of Hashimoto’s disease. A study looking at patients in Northwest Iran found that antioxidant capacity in Hashimoto’s patients was lower than healthy controls. There was also a significant association with variants in GPX1 rs1050450, elevated anti-TPO (TPO antibodies in your blood suggests that the cause of thyroid disease is an autoimmune disorder) levels, and Hashimoto’s risk.

The thyroid is the organ with the highest amount of selenium per gram of tissue. Research has suggested that selenium supplementation of patients with Hashimoto’s disease is associated with a reduction in anti-TPO levels, improved thyroid ultrasound features, and improved quality of life.

Selenium, Zinc, and the DIO1 and DIO2 Gene
Hormone Section of the Nutrition Genome Report

For the DI01 gene rs2235544, numerous studies have confirmed that the CC genotype has lower T4, and the AA genotype has higher T4 levels. This pattern suggests that the C allele confers improved function of DI01 and would result in increased conversion of free T4 to T3 and reverse T3 to T2. The CC and AC genotype should have normal function while the AA genotype may be more prone to high T4.

In the first birth cohort study looking at DI01 and organochlorines, researchers found that pregnant women with a higher exposure to organochlorine pesticides and PCBs with the AA genotype had a larger decrease in T3 levels. The hypothesis is that the AA genotype is more susceptible to chlorine-based chemicals blocking the DI01 enzyme from converting T4 to T3.

Both selenium and zinc target DI01 for the conversion of T4 to T3.

*While iodine plays an integral role in thyroid function, those with Hashimoto’s disease may need to be careful with the dosing of iodine per day and it must be balanced with selenium. Please talk with your health care practitioner regarding iodine intake and your thyroid health.

Iodine modulates estrogen levels, and a suboptimal dose may affect multiple genes in the serotonin, dopamine and detoxification section along with the thyroid. Optimal levels of iodine and vitamin D helps modulate the estrogen pathway, which may be a hormonal connection to Hashimoto’s occurrence if both iodine and vitamin D are deficient. This could be especially true if the depleted state takes place with multiple pregnancies.

Please refer to this article for a deeper discussion on how these genes may affect estrogen metabolism and iodine requirements.

Vitamin B1, and the FUT2 Gene
Digestion Section of the Nutrition Genome Report

Thiamin (B1) is one of the b-vitamins produced by bifidobacteria, and variants in FUT2 may increase the need for prebiotics to encourage bifidobacteria growth. If issues like gut issues like leaky gut are present from years of antibiotics or other causes, food sensitivities may be present including gluten, dairy or eggs.

One small study found that women with Hashimoto’s who were treated with an oral dose of thiamine or in injections showed that treatment with vitamin B1 may lead to partial or complete regression of fatigue.

Riboflavin (B2) deficiency has been shown to disrupt thyroid function. Riboflavin helps stabilize MTHFR 677 gene function, and hypothyroidism has been shown to decrease MTHFR gene function. Since variants in MTHFR 677 may require more B2, this may be a relevant link for helping to stabilize thyroid function. Riboflavin also helps convert tryptophan to niacin, which activates vitamin B6. B6 helps convert iodine into thyroid hormone.

Sources of Vitamin B2: Liver, lamb, fish, yogurt, and mushrooms

Vitamin B6 contributes to the conversion of iodine into the thyroid hormone, and low levels can significantly worsen hypothyroidism.

Vitamin B12 and the genes FUT2, MTR and MTRR
Digestion and Methylation Section of the Nutrition Genome Report

In a study of 115 patients with autoimmune thyroiditis, researchers found a decreased level of vitamin B12 in 28% of patients. Other scientists also note a significant correlation between autoimmune thyroiditis and vitamin B12 deficiency. While there was no correlation to B12 and anti-TPO antibodies, subjects in one study found that 88% declared better mood and reduction of fatigue as a result of taking B12.

Since hydrochloric acid is needed to properly metabolize B12, B1 may be the first place to start to increase B12 absorption along with prebiotic intake with variants in the FUT2 gene. If pernicious anemia and Hashimoto’s both occur together, intrinsic factor needs to be addressed.

SLC23A1 encodes the sodium-dependent vitamin C transporter 1 involved in the maintenance of whole-body vitamin C homeostasis. Variants in this gene have been linked to low baseline vitamin C levels.

Magnesium is a co-factor for COMT gene function, responsible for dopamine, adrenaline, and estrogen metabolism. Variants in COMT may increase the need for magnesium, especially for those with chronic stress. Vitamin C also helps modulate dopamine levels. Chronic stress is a risk factor for thyroid dysfunction. Read more about COMT here.

Sources of Magnesium: Spinach, Swiss chard, hemp seeds, Gerolsteiner mineral water, fish, sprouted nuts and seeds and (magnesium is very low in the water and soil in the US)

While there may be numerous genetic and epigenetic contributions to each individual case of Hashimoto’s disease and hypothyroidism, the Nutrition Genome Report gives a nutritional blueprint to approach potential deficiencies to help support healthy thyroid function, estrogen regulation, and inflammation control. These include vitamin A, vitamin D, iodine, selenium, B1, B2, B6, B12, zinc, magnesium and vitamin C. Reviewing the genes associated with these nutritional co-factors can help you identify your highest requirements, and potentially help you make drastic strides in your health journey.